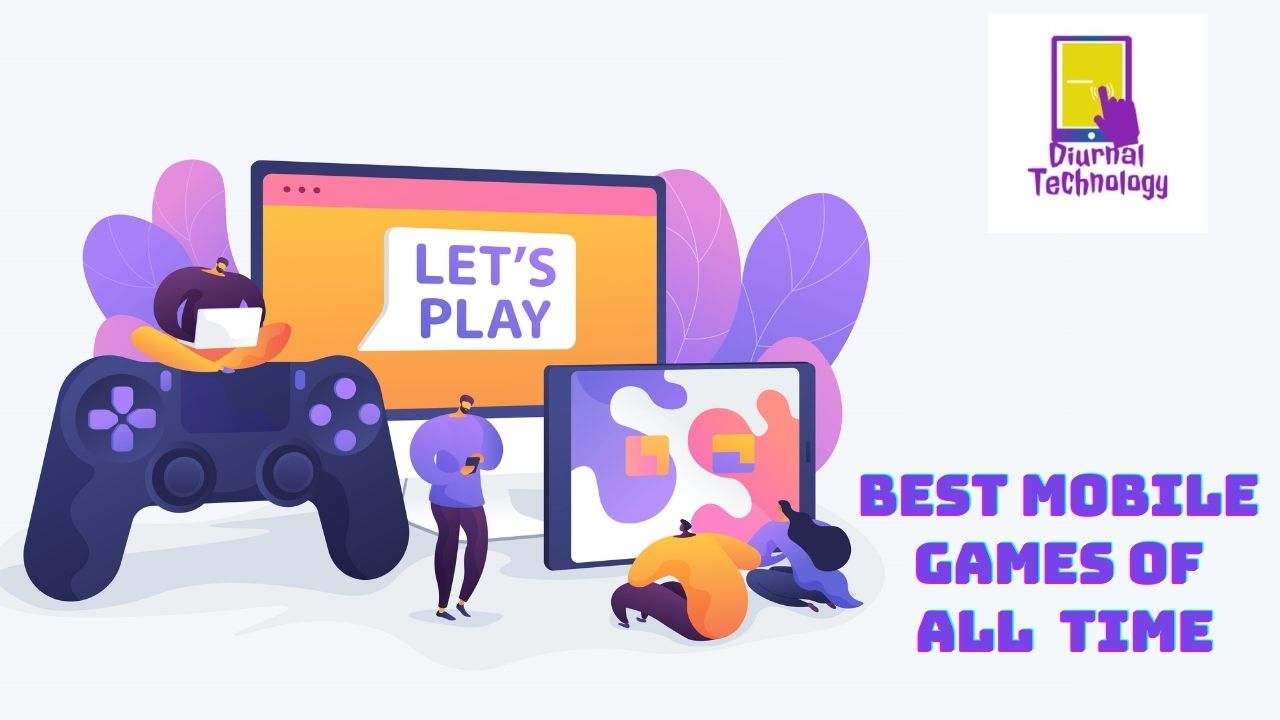 In this era, especially in this pandemic situation, we rarely can find a few people who don’t play  mobile games. There are some best mobile games of all time we all play in our life at least  once!

Ago only the children used to play video games. It wasn’t normal enough that father and son are  playing a video game together. But now it’s a very familiar scene. Even because of some popular  android mobile games also mothers being addicted to video games.

It could be possible just because of easy accessibility. We can easily download the game on our  phone. It even cost a single penny! Cause most of the games are free. There are also some paid  games, but it doesn’t cost much.

1. Call Of Duty: Most Popular Shooter Video Game Ever

From the massive success for years in the FPS pc/console gaming industry, Call of Duty  emerged in the mobile gaming industry on 1st October 2019. The intense popularity and  uncompromising graphics have made it a fan favorite in no time. It’s quite similar to other FPS  battle royal style mobile games in its kind. But what adds extra spice is its PvP mode like Critical  Ops or Modern Combat. Among all best free mobile games undoubtly this is one of the  legendary games.

Minecraft comes on top every time we have a discussion of the most popular mobile games  played Globally. More than 120 million active monthly users allow the individual players a high  degree of autonomy in gameplay. Minecraft is composed of rough 3D objects, mainly cubical  structures known as blocks. Players can create various physical things, such as buildings, houses,  wells, towns, etc. There are two modes of the game.

They can also compete in multiplayer mode with other players using the Minecraft servers.  Available at: Google Play Store, Apple Store.

Pokemon Go burst into the mainstream mobile gaming industry by capitalizing on the popular  Cartoon series “Pokemon.” Its augmented reality version of catching Pokemon’s from all around  your surrounding gives the game a competitive edge like any other game, Fulfilling many  people’s lifelong desire of “Gotta Catch em All” and turn it into a reality. The game is highly  addictive and competitive for the adventure it provides by physically being in different places to  catch Pokemons. This gives players a realistic experience of what it’s like to be a “Poke-Master.”  This is also one of the best mobile games of all time because of its popularity with kids as it is  the gaming version of the pokemon cartoon. That’s why it is one of the most downloaded  mobiles games of all time.e

If you want to name an android game that has revolutionized modern mobile gaming, PUBG is  a name that will always stand tall. From its release in March 2017 to the date, it’s going strong  with nearly millions of users. It’s an FPS/TPS game where survival is the primary goal. On an  island, One hundred players are dropped where the players have to collect their weapons, gears,  and other necessary items and survive till the end by killing other players or whatsoever. The  play zone shrinks as time goes by, and the last player or team surviving emerges with the  ‘Chicken Dinner’ which means victory. The game adds more features with frequent updates and  continuously adds more chills to the thrill, making it one of the market’s indisputable top  games. This is the best mobile games of all time, and this will remain all time best game.

Fortnite, another addition to the 100 player TPS battle royal, was released in July 2017 and  was made available for android in late 2019. It’s arguably one the most famous battle royal  games at the moment, which promises a great shooting game experience with a fantasy vibe at  the same. The concepts of the games are quite simple. Players can drop on a map where they  have to scavenge necessary weapons and materials and fight to survive to be the last man  standing. The better the combination of strategy, crafting, and shooting, the bigger the chance of  victory. It’s continuing introduction to new modes of game, variation in costumes, and several  items make it an easy hot cake in the market.

This candy crush is one kind of mind game. Skill is very much important here! That’s why this  is one of the most popular mobile games of all time. By playing this game, one can enhance their  mental solving skill. At the same time, it is fun to play. That’s why it has no age limitation.  Anyone can play anytime and anywhere. The other thing is it is full of color. That’s why children  and also other joyful people like to play this game. And also this is free. Those are the reason it is  one of the best mobile games of all time.

7. Clash of Clans: The Largest Community Game Ever

Clash of clans has a different fan base for the time. This game is so lively, and the more  important thing about this game is it is user-friendly. This is one of the best community game. It  connects people from all over the world. That’s why it has this massive achievement in the online  era. The other thing is its graphics. It visualized in such a way that people can feel like he/she is  making their field with all of their passion. That is the reason for the popularity. I guess It also  will be in the list of popular android games in 2021.

Grid autosport needs no introduction—one of the most competitive and best overall racing  games the industry has to offer. The game has beautiful graphics and very realistic gameplay,  which attracts many people. Its also supported on various consoles and devices. It’s a racing  game where the players’ race for the top prize and builds their career as they go forward. The  game has various modes, allowing for a single and multiplayer mode to enjoy with friends. There  are different lanes, tracks, cars, and accessories to enhance the gaming experience.

9. Stardew Valley: Playing a role in A Royal Way

Stardew Valley is a recently developed simulation game where the player is tasked with  overtaking the form of a recently deceased Grandfather. This is a role-playing game as the new  player is now charged with doing all the necessary tasks. These tasks include raising the  livestock, growing crops, collecting ores from the mines, intermingling with the neighbors,  marrying and raising children, etc. So it’s a bona fide example of farm life in the form of  gameplay. This attracts many people who would like to experience a simple yet exciting  lifestyle.

Fruit ninja is like the national game for all the game lovers. We can’t find a single person who  doesn’t love this game. Anyone can play this game. This is the easiest and famous game. People  of any age can play, and most other thing is hilarious. But one can bring out anger by cutting  fruits. Haha sounds funny. But without any doubt, we can count this one of the best mobile  games of all time.

If you’re more of a fun-loving guy and action lover simultaneously in gaming, mobile legends  will be a mouth-watering one for you. From its release in July 2016 to now, the skyrocketing  hype is still the same. It’s a 5v5 team game where your goal is to destroy your opponents’  basement’s main turret. You’ll get many characters in the game labeled as Tank, Fighter,  Assassin, Marksman, Mage, and Support. Every character has three unique abilities, with one  essential. You can level up your name in the game by many gears as time goes. Winning every  match will require your team strategy, battle tactics, the combination of your abilities, and your  presence of mind.

12. Clash Royale: Another Community Building Game of All  Time

After the massive success of Clash of Clans, Supercell released this notable 1v1 battle royal  in January 2016, which is still now one of the highest-grossing mobile games. It’s just a 3  minutes face-to-face battle where the goal is to destroy all three opponents’ castle or at least  destroy one castle more than your opponent with your deck of 8 cards. A tie results in a 1-minute  tiebreaker. With every card, it represents a different character with different abilities. Your  winning will require your strategic deck combination, battle strategy, creativity, and your  presence of mind in the blink of time.

 What is your favorite game on your smartphone?

–Everyone has a different taste. For me, the clash of clans is my all-time favorite. I  found some other clash of clans lover. Let’s see another opinion-

“My favorite game was Clash of Clans. I loved playing it. It was the first game I downloaded  on my phone. I played it for almost 6years and I was addicted to it. I was so so much addicted to  it that most of my dreams(literal) were about dark elixir or the Archer Queen.” – Tushar Panday   source: Quora

 What is the best mobile game?

— There are so many options in the gaming world. & Also a lot of variety of genres. If  anyone asks this question, then definitely every individual has its own opinion.  After surveying, that’s why I got some different reviews. Here is one of them

“Believe it or now not, in case you own a cellphone and feature even touched Candy Crush,  you’re a video game player. Contrary to what Reddit threads say approximately “dirty casuals”  who dabble in cell games for a laugh, you stand with us, a super and completely shaped  Gamer™.Welcome to the club”.- Md Arman

 Which is the No 1 mobile game in the world?

— Subway surfers is the no 1 mobile games of all the time. It was released on May 24,  2012. And among the recently released games, PUBG is the No 1 game in the world.   Source: Wikipedia

Technology is upgrading day by day and so on the inventions of new  things. In this competitive time, the gaming sector seems to hit new  heights. And also, the games are going to bet on the new level. It is  nowadays a passing time, but it has a significant impact on our daily  life. Here we discussed the best mobile games of all time. And those are  the most popular mobile games. Many new games will add on. But  surely those will be in the hit list of most popular mobile games 2021  also.